She is the daughter of the Earl of Carnarvon, brought up to make her society debut and follow it with a prestigious marriage. But popular and pretty Lady Evelyn Herbert has other ideas. First she falls for a man her mother doesn’t approve of, then she accompanies her father to Egypt, leaving behind the world of etiquette and chaperones to work alongside archeologist Howard Carter in the Valley of the Kings.

In November 1922 the extraordinary happens when they discover the burial place of Tutankhamun, packed full of gold and inconceivable riches. Eve is the first to crawl inside, the first person to see the treasures in three thousand years. She calls it the “greatest moment” of her life—but soon afterwards a string of tragedies leaves her world a darker, sadder place.

Newspapers claim it is “the curse of Tutankhamun.” Howard Carter says no rational person would entertain such nonsense. Fifty years later, an Egyptian academic comes asking questions about what really happened in the tomb in 1922. And that visit unleashes a new chain of events threatening Eve’s happy life, and making her wonder if there could be some truth behind the stories of an ancient curse.

Scroll down for reviews: 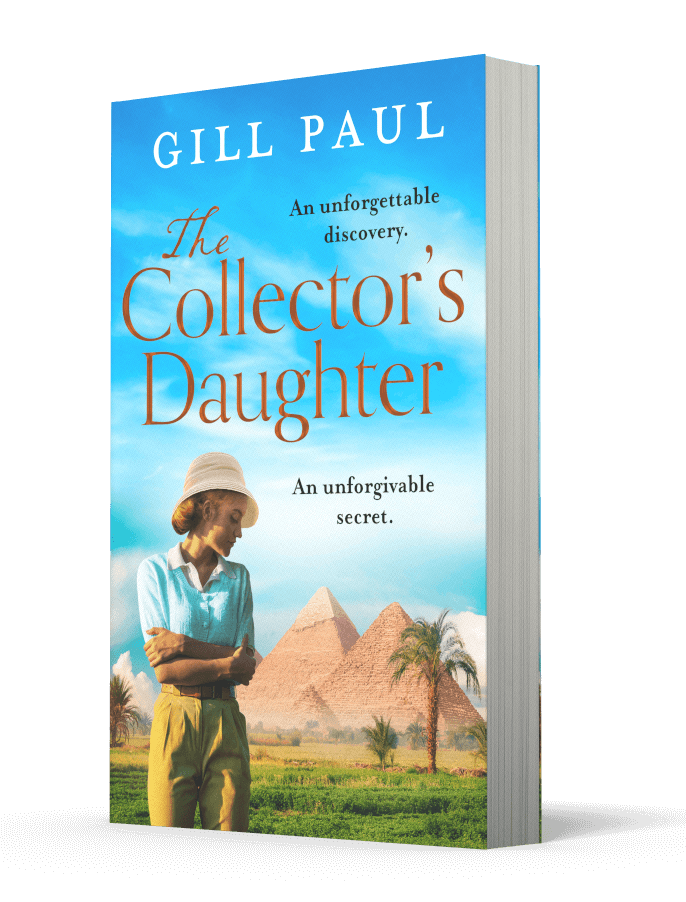 PRAISE for The Collector’s Daughter

“This is a compelling story, impeccably researched, with a delicious sense of time and place, that combine to bring the historical characters to vivid life. The changing social  attitudes of British High Society generated by the Great War and then through to the 1970s is fascinating. And the resultant damage to the men and their families caused by the war is deeply moving. I adore a story of buried secrets and discoveries and this book has it all. It deals with the big questions too: What is true? Memory versus history, and how we block out the past. I loved that.” Dinah Jefferies, author of Daughters of War

“The Collector’s Daughter is absolutely glorious. This beautiful novel, exploring the extraordinary life of Lady Evelyn Herbert, and the secrets of Tutankhamun’s tomb, oozes with emotion, glamour and mystery. From London to Luxor, Highclere Castle to Cairo, I was entranced at every step. Gill’s writing is utterly transportative, and entirely addictive. I cannot rave about this novel enough.” Jenny Ashcroft, author of Meet Me in Bombay

“What wonderful storytelling! From the very first chapter of The Collector’s Daughter Gill Paul draws you in to the exotic worlds of Lady Evelyn Herbert, the first person to enter Tutankhamun’s tomb, and the alarming reverberations of those early adventures through the rest of her life. I didn’t want it to end.” Liz Trenow, author of Under a Wartime Sky

“One can see the light sparkling on the surface of the Nile and smell the musky, ancient air in the newly opened tomb. Gill Paul’s sensual exploration of this famous event travels across five decades, asking whether the tragedies that followed were due to curse or coincidence, and giving fresh life to this most beguiling corner of history. Unputdownable!” Sarah Steele, author of The Missing Pieces of Nancy Moon

“In her latest novel, THE COLLECTOR’S DAUGHTER, Gill Paul weaves an intriguing tale about an historical mystery we know, and a woman we don’t. Wonderfully compelling from beginning to end, The Collector’s Daughter will mesmerise its readers as much as the lure of ancient treasures mesmerised these famous Egyptologists. An absolute delight!” Hazel Gaynor, author of Bird in the Bamboo Cage

“A glorious read. I can’t stop thinking about it. Gill Paul’s real strengths lie in giving female historical figures a voice. She is such an empathetic writer and coloured Eve’s life in with warmth and compassion. Really really emotional and unique read and so beautifully told. It’s made me want to catch a whiff of that tomb and the mysterious poisoned oil. Bravo. I shall recommend it to absolutely everyone.” Kate Thompson, author of Secrets of the Lavender Girls

“Meticulously researched and sensitively written, The Collector’s Daughter is an intriguing tale of the discovery of Tutankhamun’s tomb from the point of view of the first person ever to enter it, Lady Evelyn Herbert. Years later, that moment continues to cast a long shadow over Evelyn’s life as she battles with ill-health and her guilt at having removed a few items from the tomb.” Kath McGurl, author of The Lost Sister